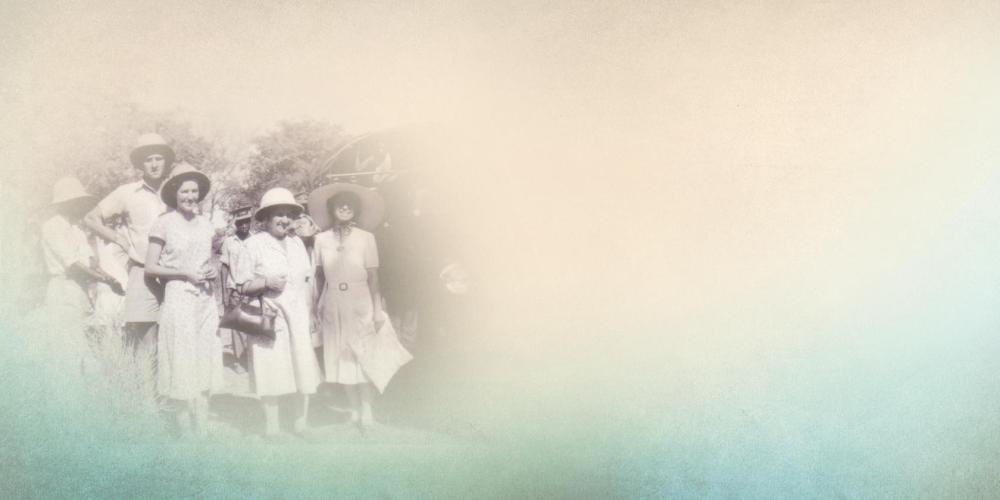 Adventures of a Reluctant Missionary

Just six weeks after we were married, we arrived in Zambia for our first mission appointment.

Suddenly I felt like crying. We were on our way to church, listening to a CD of George Beverly Shea singing “How Great Thou Art.” My husband, Fred, joined in, adding his bass voice to one of my favorite songs. That voice took me back 65 years to our college days when he sang in a double male quartet.

It had taken some time to find the right guy. Back in high school, I remember looking out the window of my dorm room, watching a missionary family walk along the path. The mother had long, graying hair and was wearing a faded, outdated dress. Several little ones were running beside her. All of them had a yellowish skin color, the result of taking a malarial drug. If that’s what you look like when you’ve been a missionary, I said to myself, I’m not interested. Never!

But now, here I was in college. I’d been checking out all the eligible young fellows on campus, but no one quite caught my eye. My best friend, Rena, the pianist for the double male quartet, was eager to introduce me to Fred Thomas. He was one of the basses, but since he was from a missionary family in Kenya, I was hesitant. I’d heard that he planned to return to the mission field upon graduation.

Eventually, Rena won out. Under the flowering goldenrod arbor in front of the girls’ dorm, she introduced me to Fred. He brought along a slab of Cadbury’s chocolate to make a good impression. And that was the beginning of the rest of my life! It wasn’t long before I changed my mind about being a missionary. Now I can look back and see how God guided and protected us through the 65 years we’ve been together.

Just six weeks after we were married, we arrived in Zambia for our first mission appointment. The only feasible way to get to the mission station in this remote and primitive area was by a single engine, five-seat airplane, called a Rapide. The sides were made of canvas, but we made it safely, much to my relief. Our few possessions were to come much later by barge up the Zambezi River.

Upon arrival we rode on the flatbed of an old army truck through the forest on sandy tracks. The ink was barely dry on my new degree in home economics, so you can only imagine what I was thinking as we were ushered into the thatch-roofed house we were to share with another family. We had one small room for ourselves, plus an attached closed-in porch, just large enough for a bed. The kitchen and washroom, both painted dark green, and the outhouse were to be shared.

Drinking and wash water for the house, brought up from the river some distance away in buckets, was pumped up into a raised tank in the back yard.

To my dismay, I learned that the task of carrying water to the house was given to the lepers from a nearby colony.

The nearest grocery store was 400 miles down the Zambezi River to the town of Livingstone. The only fresh produce we had was whatever we could grow in a small garden.

The mission operated a small elementary school, a church, and a dispensary run by a brave Norwegian nurse. She was the only medical help available for anyone within a 300-mile radius. Most of the local inhabitants were spirit worshippers, so we would often be lulled to sleep by the sound of drums beating in the distance.

After two years on the mission, Fred had an opportunity to use the skills he learned in carpentry and construction as he worked his way through college. He was asked to start construction of a hospital and housing for doctors. Since it was to be built on a piece of uninhabited land, some distance from the mission, we moved to the construction site and lived in a mud hut. Nine-foot mamba snakes were frequent visitors.

By now we had one baby, little Frederick, so while Fred was supervising the making of bricks and the construction of the buildings, I would watch our son as he played in the sand under a shade tree in front of our hut. I also distributed simple medicines to the local women and children who came around for help.

As a result of our organizing a Sabbath School and holding a church service under the shade of a large tree, a number of individuals showed an interest in studying the Bible. They were baptized a few months later in a crocodile-infested river.

Once some of the buildings were completed and a doctor had been appointed, we were relocated to Kenya. Situated on a beautiful mission compound, the living conditions were much easier. Water was no problem because it rained every afternoon for about an hour. The lawns around the house were soft and green, and the vegetable garden was very productive.

By now we had four active little boys. The three older children were in need of homeschooling, but they were much more interested in riding bikes and pushing their baby brother around in a buggy. Since our house was built on steep ground, the boys had to see for themselves how the buggy springs worked on a slope! Every Sabbath we attended a different church, wherever Fred had been invited to preach. Our family was quite a curiosity to the local people.

Our next move took us to Tanzania. Now we felt it would be best for the three older boys, Frederick, Dave and John, to attend the boarding school in Nairobi, Kenya. This was a very difficult decision for me. We saw them only once every three months, and, oh, how much they grew during that time!

Another move took us to Zimbabwe, and once again the boys had to go away to boarding school. This time they would travel some 2,500 miles distance by train. The first time we did this was on a Sabbath morning, the only day of the week the train left from Bulawayo, where we lived, for Cape Town, South Africa.

After hugging them goodbye, we headed to church with heavy hearts. The person offering the prayer in church asked God to protect and bless the children who had just left for boarding school. I promptly burst out crying—I couldn’t help it! Sacrificing our children—it was becoming unbearable.

When it was time to send Peter, our youngest son, away to school, it was more than I could handle. Being missionaries in remote, undeveloped places was not our most difficult experience. The hardest thing was being separated from our children. It was because of my aching heart that we immigrated to the United States, where our children could live at home and commute to school every day.

Now here we are, 65 years later, having served in many different areas of Africa, the United States, and in the Middle East. We praise God for His goodness and protection. The gospel is spreading across the African continent in an amazing way. Once the recipient of missionaries, Africa now sends missionaries to other parts of the world.

Today I am thankful to God for bringing the son of British missionaries into my life. Frederick Herbert and Florence Thomas left the shores of England in 1924 and served in Africa for 40 years. Their son Frederick George changed my perspective of mission forever. I wouldn’t trade our adventurous life for anything!

Now retired, Jean and Fred’s neighborhood is their current mission field. They deliver Meals on Wheels to housebound residents, organize birthday celebrations for the neighbors on their street, and tend a flourishing flower garden. Birds from miles around visit their birdfeeders daily.